Wisconsin is a Pioneer in Education Reform 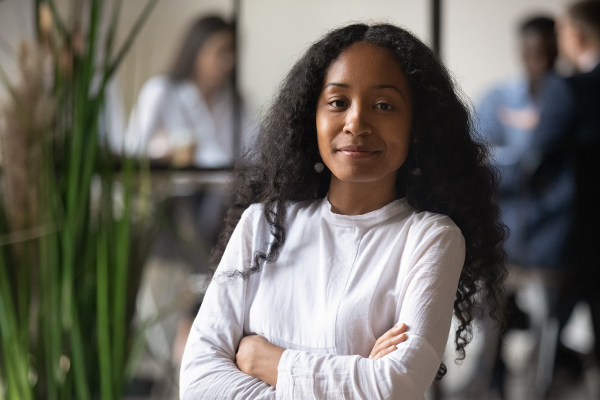 The Milwaukee Parental Choice Program, enacted in 1990, was the nation’s first to allow low-income parents to choose private schools. Its 1995 expansion allowed parents to choose religious schools. Today, Wisconsin has four private school choice programs, a charter program, and an open enrollment program allowing transfers to non-resident districts. Positive results bear out the value of parental freedom. Those results come despite the fact that each program faces limits that constrain a true test of the power of giving parents control of their children’s education.

What Began in Wisconsin Has Gone National

Today there are 76 parent choice programs in 32 states, plus the District of Columbia and Puerto Rico, that serve 1.4 million children. The pandemic is fueling explosive growth. The Wisconsin gains were hard won. Key to success was a coalition of parents who wanted their children to succeed, business leaders who needed educated workers, and religious and community leaders seeking a stronger city. It was a coalition of strange bedfellows that crossed political, socio-economic, religious, racial, and ethnic lines. The opposition was fierce. In the 1990s the coalition faced regulatory and legislative assaults and withstood multiple court challenges. The victories helped pave the way for a 2002 U.S. Supreme Court win. We are grateful to the elected officials, generous philanthropists, and the many friends and advocates who are responsible for this progress. We salute the leaders in other states who have made such remarkable gains.

On state tests of academic proficiency, there are 30 ways to compare public and voucher students. The most recent results show that voucher students outperformed low-income public school students on 29 of 30 measures. 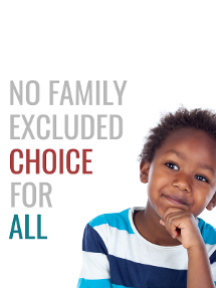 The Milwaukee program expands to include religious schools.

Drawing on the Wisconsin ruling, the US Supreme Court upholds the Cleveland program.

The Racine program is enacted.

The statewide program is enacted and strengthened in 2015.

The special needs program is enacted. 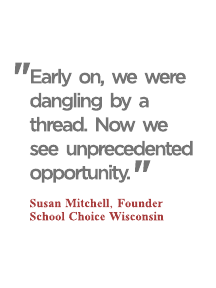 Challenges remain. Limits on eligibility, inequitable funding, and heavy-handed regulation are barriers to better results. Special interests continue to back elected officials who seek to scuttle or hamstring the programs.

Significant opportunities more than offset these challenges. The pandemic has awakened Wisconsin parents to the value of educational freedom. The prospect of a more favorable political climate opens doors to real progress in the years ahead.

School Choice Wisconsin is ready to work with allies to seize the day.