Voters Sharply at Odds with Lecture to Parents

Wisconsin voters are sharply at odds with a Democratic party official and legislator who said parents who want “to have a say in their child’s education” should home school or pay private school tuition.

On February 10, the Vice Chair of the state Democratic Party, Representative Lee Snodgrass, tweeted: “If parents want to ‘have a say’ in their child’s education they should home school or pay for private school out of their family budget.” She posted this while an Assembly committee held a hearing on legislation to create a Parent Bill of Rights. (Following an immediate backlash, she deleted the tweet.)

“Representative Snodgrass is out of touch with Wisconsin residents,” said Nic Kelly, president of School Choice Wisconsin. Citing a scientific, random sample of 700 likely voters, Kelly said 59% of respondents said they would be less likely to support a politician who held Rep. Snodgrass’s view. Only 28% said they would be more likely to support a candidate with that opinion.

Opposition to Snodgrass’ comments is widespread throughout the state, spiking to 60% in the crucial Milwaukee media market and 65% in the Green Bay market. Even in the liberal stronghold of Madison, a strong plurality of voters said the statement makes them less likely to support a candidate (47% less likely / 38% more likely). Similarly, there is strong opposition among both male and female voters, 61% and 57% respectively. 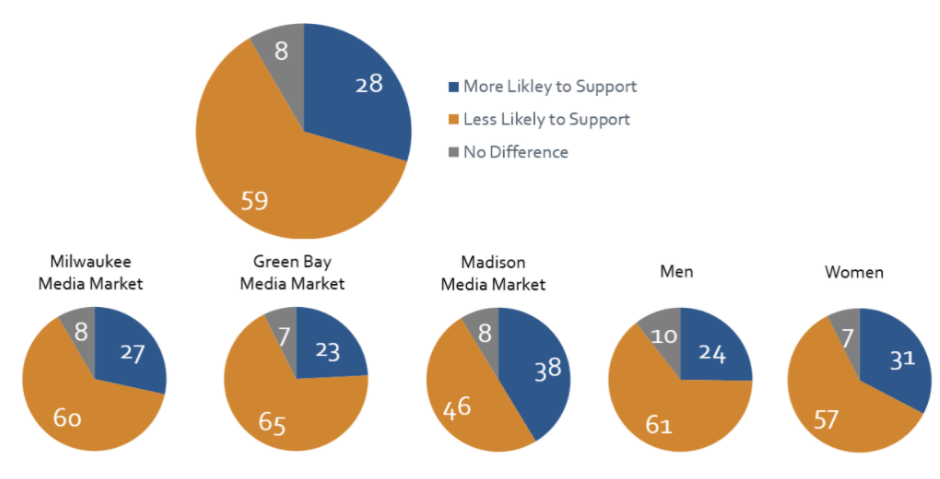 The survey was conducted for SCW between February 13th and 16th by OnMessage Inc., a national public opinion research firm. OnMessage was recognized by the American Association of Political Consultants as “Pollster of the Year” in 2019.

Kelly said the survey (further results to be released February 22) showed strong support for Wisconsin’s school choice programs. “On a wide range of issues, voters confirmed that an awakening has occurred. Parents want more options and a greater say in the schooling of their children,” he said.

This survey was conducted by OnMessage Inc. in Wisconsin. Telephone interviews were conducted on February 13-16. This survey consists of 700 likely voters and was stratified to reflect historical voter trends and the margin of error is +/- 3.70%.