Yesterday, a LFB memo was released highlighting the state aid portion of education funding and the relative levels between the Parental Choice Programs and traditional public school district funding increases. As has been the practice, the request for the memo is selectively narrow to give only a portion of the data without context. The memo pointed to an increase in voucher funding compared to a decrease in public school funding.

In this instance, the illusion of higher voucher funding is woven into a narrative that lacks context by only using the state portion of funding. While the per pupil voucher amount has risen since 2010, that funding needs to be examined in context in order to have a legitimate comparison to district schools. District schools receive state aid, property tax revenue, and federal funds. By comparison, the voucher programs only receive state aid.

According to DPI, the average combined funding for district schools compared the voucher can be seen in this chart: 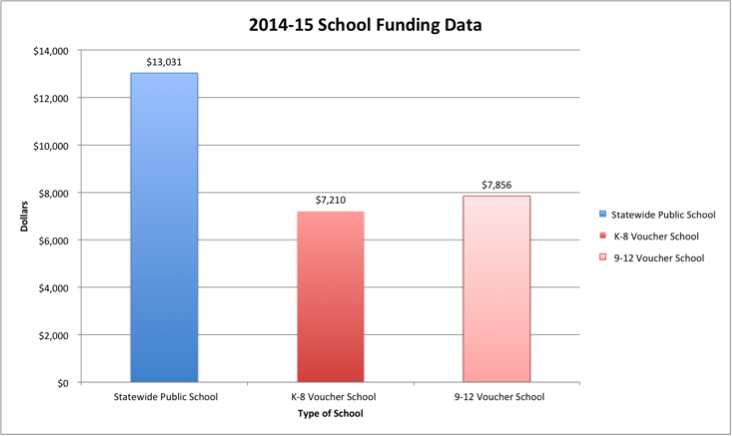 When all funding sources are compared, district schools receive $13,031 per student whereas the voucher is funded at $7,210 (K-8) and $7,856 (9-12) per student by 2014-15 numbers. Both district funding and voucher funding have increased slightly since then, as they are both tied to the same overall funding increase. Overall, however, even after the increase in voucher funding per student, it falls far short of the funding for public school students.

“When comparing education funding, all sources need to be considered,” Jim Bender, President of School Choice Wisconsin, said. “Selective, narrow comparisons do not give the context needed for accuracy. When all funds are considered, not just state funds, the voucher amount remains significantly lower than the public school funding per student.”

In addition to the per pupil funding, the LFB memo also highlights the impact of the funding sectors on the state GPR budget. For 2016-17, funding for the Parental Choice Programs makes up only 1.5% of the state GPR funding while district funding accounts for 31.9%, the largest single commitment of GPR funds in the state budget.