Rosa Gonzalez shakes her head as she remembers where her daughter was just three years ago. 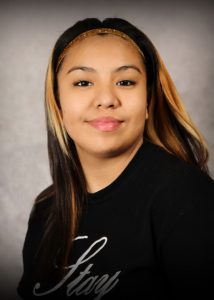 “When Stephany was in ninth grade at the local high school, it was too bad,” she says, adding that she didn’t seem to have control over her daughter, who was disengaged from school, skipping classes and hanging around with other students who did not value education.

On May 24, Stephany D’Avila will be the very first person in her family to graduate from high school. She also holds the distinction of being one of the three first high school graduates to come out of the Racine Parental Choice Program, all of whom attend Shoreland Lutheran High School, a WELS school, in Sommers.

The path to graduation wasn’t easy.

Stephany’s freshman grade-point average before entering Shoreland certainly reflects this point. She finished the year with a 1.0, a “D” average.

“I walked around the hallways and bothered other classes,” the 18-year-old admits. “I talked a lot. I talked back to teachers. When I got home from school, if I went, I’d just sit around. If my mom asked me if I had homework, I’d say no.”

Stephany can’t explain her behavior or lack of motivation. But she can pinpoint when things began to change: when she was accepted into the school choice program as a student at Shoreland.

The strict rules and clear direction that Shoreland sets out for students has made the difference, says Stephany.

“I like how Shoreland is more interested in you,” she says. “They know me by my name  I know the rules. If I don’t do my homework and have three papers missing, I’ll have to stay after school for study hall, and there is enough warning to change things. Teachers put a lot of effort into students and will give me extra help.”

Stephany says she had help from her family as well. Her mom was insistent that she be a good student and was adamant about graduating from high school. Rosa herself was only able to complete third grade. To have a high school graduate in the family is a major accomplishment that they all share, a real source of family pride.

Stephany’s older sister, Jessica, did not graduate, but she had some important advice for her younger sister so that prospects would be different for her – focus less on the social environment and more on yourself.

That’s advice Stephany took to heart. She began to notice her own accomplishments rather than get involved in the people that revolved around her social circles outside of school.

Stephany knew she needed extra help to succeed. “I struggled here at first,” she recalls. “The classes were much more advanced, and at first I didn’t get them. But through help with a mentor and my teachers, I finally got to the point where I could understand the work.”

For Paul Scriver, principal at Shoreland, Stephany is that story that they keep telling over and over at the school. She had hurdles to get through, and she did the hard work and sought the help she needed to do what she sees as important, he says.

Stephany is looking forward to the day when she gets that high school diploma, which she says will undoubtedly be her favorite high school memory. It is bound to make a huge impression on her little brother and nephew – both in fourth grade.

Luis Delgado, her brother, says he is proud of his sister. She can help him, and of course, he plans to graduate, too!